Almost 2 years from today will mark the opening of Expo 2020 Dubai.

Taking place from October 20th, 2020 to April 10th, 2021, it is expected that 25 to 30 million visitors will arrive in the emirate to attend. International tourists are predicted to total approximately 62% of that amount.

Themed Connecting Minds, Creating the Future, exhibitors will showcase the latest advances in Opportunity, Mobility, and Sustainability, which address the most pressing issues of our time.

It was in 1851 when London established the first Great Exhibition of the Works of Industry of All Nations or as we now know it, World Expo. The aim of the exposition was to present the latest ideas and innovations, as well as to encourage collaborations between exhibitors and countries.

Throughout the last 150 years, the world has been introduced to the telephone and Heinz ketchup in Philadelphia, 1876, and the Statue of Liberty in Paris, 1878. In the last half century, we have seen the launch of the first mobile phone in Osaka, 1970, and the world’s first touchscreen in Knoxville, 1982. In addition to the displays within, tourists will also flock to the site to see the latest innovations in architecture and design.

Over a decade ago, 13 architecture firms submitted their proposals to design a trio of pavilions that will become the heart of the 438-hectare site. In March 2016, Foster + Partners, BIG and Grimshaw Architects won the competition to design the Mobility Pavilion, the Opportunity Pavilion, and the Sustainability Pavilion respectively.

Described by the committee chairman, His Highness Sheikh Ahmed Bin Saeed Al Maktoum, as a “festival of human ingenuity”, Expo 2020 will add to Dubai’s short, yet fruitful history, and contribute to its long-term development.

What does this mean for the events and exhibitions industry?

As the first World Expo to take place in the Middle East, Africa and South Asia, Dubai has the opportunity to enhance its reputation as a central hub for the entire MENASA region, as well as establish its infrastructure and connectivity.

The industry has already seen a shift with the knowledge that Expo 2020 is on the horizon, preparations are already underway. It is the perfect chance for local companies to gain credibility by demonstrating their services and abilities, sequentially achieving more visibility on a global scale.

For stakeholders, such as event and exhibition contractors or architecture firms, it is not only a door to international opportunities, but a way to increase future collaborations and cement the success of their current activities.

As well as those onsite at Expo, we can also expect many offsite events and exhibitions to take place. The local industry needs to be ready to cater to a much larger scale of work in addition to the seasonal projects we have grown accustomed to.

What can be expected from us?

We have expanded and implemented new strategies to manage, deliver and sustain our work, ready for the demand we anticipate the next 2 years and beyond to bring. 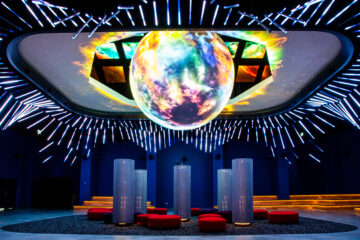 Whether you are interested in a fresh shop window fit out, an appealing brand activation, or an immersive event experience, the way to start is always by looking at the upcoming trends.